Hilton Hotels Corp. CEO Stephen F. Bollenbach will step down at the end of the year, but will retain his role as co-chairman of the board through 2010, the hotel operator said. 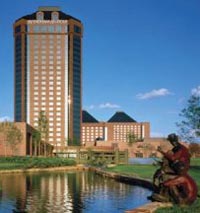 The Beverly Hills-based company said Thursday it expected to name a successor to Bollenbach by this summer.

Bollenbach, 64, served as CEO the past 11 years. On the board, he will assist with long-term planning, strategic oversight and other matters, the company said.

His employment agreement calls for him to serve as a consultant to the company for a year after vacating his position on the board.

"We are pleased that we along with our shareholders, team members and hotel owners will continue to have the benefit of Steve's business acumen, experience and insights as Hilton strengthens its position as the premier global lodging company," Hilton co-chairman Barron Hilton said in a prepared statement.

Hilton operates more than 2,800 hotels in more than 80 countries. Its brands include Doubletree, Embassy Suites, Hampton and its namesake.

Hilton spokesman Marc Grossman said Bollenbach had made no secret he intended to retire as CEO at the end of the year and remain on the board.

Among the dramatic changes overseen by Bollenbach, Hilton grew and spun off its gaming business, steered the acquisition of Promise Hotels and forged an alliance with Hilton International that served as a precursor to the two companies merging last year.

"He's been, by all measures, an incredibly successful CEO," said Robert LaFleur, a lodging industry analyst with Susquehanna Financial Group. "The stock is up $10 (Ђ7.7) since the summer, so certainly there wasn't any clamoring for a new direction for the company."

On Thursday, Hilton announced Hart was elected to the company's board.

"He's been the obvious successor for some time and the election to the board, I think, solidifies that thinking," Randall said.