Apple teases fans with "Lovely Rita" but no Beatles on iTunes

Apple Inc.'s consumer electronics are getting better all the time, but the company is apparently getting little help from its friends in England. 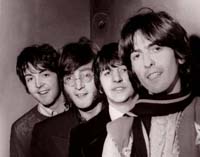 Apple teases fans with "Lovely Rita" but no Beatles on iTunes

Thunderous applause greeted Apple CEO Steve Jobs when he cued up the song "Lovely Rita" from the Beatles' "Sergeant Pepper's Lonely Hearts Club Band" on the company's new iPhone gadget during Tuesday's Macworld Conference & Expo. For weeks, blogs and Web sites had speculated that the Cupertino-based company would be announcing a deal to distribute the Fab Four's music on its iTunes digital music store.

But while iPhone got a standing ovation from Apple fanatics and was warmly greeted by Wall Street, "Lovely Rita" was just a tease.

During his two-hour keynote, Jobs never followed up with an announcement about the Beatles, and their music remains conspicuously absent from iTunes.

Music sites such as Microsoft's MSN and Rhapsody have also serenaded the lads from Liverpool but their record label, Britain's EMI Group, has rebuffed suitors.

Although Apple was a pioneering peace maker between Silicon Valley and the recording industry, its relationship with the Beatles has been particularly tortured.

The Silicon Valley icon has been embroiled in a long-simmering legal battle with Britain's Apple Corps, guardian of the group's commercial interests.

The two Apples have been exchanging legal salvos for 20 years over their names and fruity logos. The last skirmish came in May, when a British judge ruled that iTunes did not violate a 1991 agreement stipulating that the computer maker could keep doing business if it didn't enter the music business.

An appeal is scheduled for February, and it's unclear how the name change Apple announced Tuesday from Apple Computer Inc. to Apple Inc. might affect the case.

Jobs said Tuesday that iTunes has sold more than 2 billion songs, but the only Beatles songs are covers and tributes. For now, the only legal way of getting the band's tunes onto digital music players is to buy a CD and make a digital copy yourself a process known as "rip and burn."

So Jobs, who's always had a flair for the dramatic, left fans wondering whether a deal had fallen through at the last minute. Instead of hearing Paul McCartney, as some aficionados had predicted, they were treated to a live performance by pop sensation John Mayer.

After the show, Apple senior vice president of worldwide marketing Phil Schiller refused to answer questions about why Jobs would demo a song not available on iTunes, reports AP.

"We don't have anything to say about that," he said.

"Anyone can rip their own CD," Cue said. "Steve's a huge Beatles fan huge. He rips and burns."