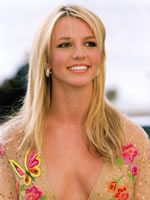 The former backup dancer and aspiring rapper is also seeking spousal support. He says the couple's community assets are "uncertain," though Spears said in her divorce papers there was none to speak of.

"Kevin is prepared to go the distance in order to do what he feels is necessary to protect and safeguard the children and will not be intimidated or dissuaded from pursuit of those goals," Michael Sands, spokesman for Federline's attorney, Mark Vincent Kaplan, said Wednesday.

On his way to party at a club following a performance in Chicago Wednesday night, Federline was asked by a reporter if he was prepared for a legal fight with Spears. He smirked and didn't answer.

Spears, 24, and Federline, 28, have a 1-year-old son, Sean Preston, and an infant son, Jayden James, who was born Sept. 12. Spears is seeking custody of both children.

Spears wed Federline in the fall of 2004. They had a ceremony in September, but court papers state the couple were officially married Oct. 6.

It was nonstop drama after that.

Magazines could not get enough of the pair, documenting their every tender gesture and teary-eyed fight. The couple contributed to the coverage with their self-filmed reality TV show, "Britney & Kevin: Chaotic."

The tabloids depicted him as a partygoer living off his wife's fame and fortune. She was painted as a bumbling mother with fading figure and visage. Her chart-topping career all but imploded.

It was the first marriage for Federline, though he was still dating his pregnant girlfriend Shar Jackson when he met the pop star. Jackson gave birth to Federline's second child just months before he married Spears.

It was the second wedding in a year for Spears, whose 55-hour marriage to childhood friend Jason Alexander ended in annulment.

Born in Kentwood, Louisiana, in 1981, Spears got her first taste of fame at age 11 when she joined the "The All New Mickey Mouse Club" TV show. Her fellow Mouseketeers included future superstars Justin Timberlake and Christina Aguilera.

Five years after leaving the show, Spears released her debut album, "Baby One More Time" and skyrocketed to fame.

Federline appeared in the 2004 movie "You Got Served" and performed as a backup dancer for Timberlake, Pink and Michael Jackson. He released his debut CD, "Playing With Fire," on Oct. 31.

In an interview with The Associated Press two weeks ago, he praised Spears as a positive force in his life.

"Her influence on me has been really big," he said. "She's a strong woman and she knows what she wants out of life and that helps build a strong man. I look up to you baby."