Student from Iran accused of running down people

A University of North Carolina graduate from Iran accused of running down nine people on campus to avenge the treatment of Muslims is scheduled to make his first appearance in court Monday. Mohammed Reza Taheri-azar, 22, is charged with driving a rented Jeep Cherokee on Friday through a popular on-campus spot, hitting nine people. Six were taken to a hospital for treatment, but not admitted, while three declined treatment at the scene. 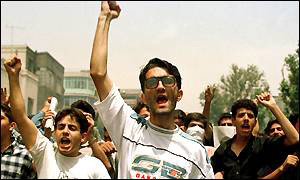 Student from Iran accused of running down people

Taheri-azar is charged with nine counts of attempted murder and nine counts of assault. He arrived Monday at the Orange County District Court for his hearing after being held over the weekend at Raleigh's Central Prison on a $5.5 million (4.6 million) bond.

Taheri-azar graduated from North Carolina in December after studying psychology and philosophy. Investigators believe he has spent most of his life in the United States, said university Police Chief Derek Poarch. Taheri-azar told police he intentionally hit people to "avenge the deaths of Muslims around the world," Poarch said Saturday.

A group of students was planning an "anti-terrorism" rally on campus Monday to coincide with the hearing. "We don't want terrorism here, and we're not gonna stand for that where we live and where we go to school," said Kris Wampler, a student and member of the school's chapter of the College Republicans, which helped organize the planned rally, reports the AP.