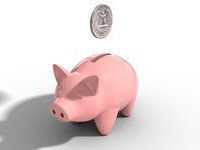 First vice-premier of Ukraine, Sergei Arbuzov, and Finance Minister Yury Kolobov visited the headquarters of the fund in California to discuss the details of future cooperation.

Investment company Franklin Templeton (FT) was established in 1947. The company manages assets worth about 815 billion dollars. The fund owns bonds of Ireland that were acquired during the time of the financial crisis. After Ireland received financial support from the EU and the IMF, Franklin Templeton gained considerable profit.

However, experts call the deal with Ukraine a more risky endeavor. The financial position of Ukraine is to significantly worsen on world markets. Morgan Stanley's analyst Paolo Bathory said that the Ukrainians may face severe shortages of cash and assets.

Ukraine currently considers the issue of European integration. Russia in its turn calls on Ukraine to join the Customs Union.