Russia ties Europe to its natural gas even stronger

On Monday, October 8, the second stage of the Nord Stream pipeline was launched in operation. The total capacity of the pipeline is thus expected to grow to 55 billion cubic meters a year. 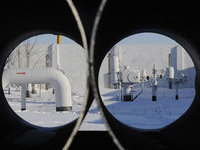 There was only one line of Nord Stream operating before this. Commercial gas supplies on the line of the similar capacity began eleven months ago, on November 8, 2011, RBC reports. As Vladimir Putin said during a teleconference, Nord Stream is able to meet Europe's growing demand for energy resources.

"The gas will be supplied directly along the shortest route, connecting Russia's largest gas deposits with European markets without transit risks, stably and smoothly. We guarantee this," said Putin.

It is worthy of note that a recent study confirmed that the construction of one or two additional lines of the Nord Stream was possible both technically, environmentally and financially.