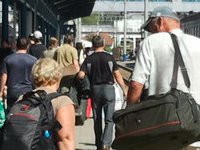 Representatives of the Association took part in the meeting of the Russian-French Working Group on Tourism within the framework of the Russian-French Council on economic, financial, industrial and commercial issues. The meeting was organized by Rosturizm (Russian Tourism) from the Russian side, and by the Department of International Relations of the Ministry for Industry, Trade and Tourism of the Republic of France.

According to ATOR's First Vice-President Vladimir Kantorovich, abolishing the visas for visiting the overseas territories of France, if not France itself, will increase the flow of tourists, KM.ru reports. Abolishing the special visa, which is required for visiting French islands, is much easier than canceling the Schengen visa.

"For Russian citizens, getting such visas takes an indefinite amount of time, since the request for a visa is sent each time to the authorities of this or that territory," said Kantorovich.

In an interview with Vesti FM, the head of ATOR said: "Actually, this conversation did not come up with the Ministry of Foreign Affairs - we discussed this with the Ministry of Tourism of France. The Russian-French group discussed the issue, and the officials from the Ministry for Tourism said that they would be happy to abolish visas for Russians. Unfortunately, they added, they could not do it alone. The decision should be taken by all members of the Schengen group. I suggested to them that France has a unique opportunity to do so, because in the French overseas territories do not require a Schengen visa, which they can not cancel single-handedly indeed. The overseas territories require the French visa," the official said.