Silver medalist of the Olympic Games, one of the world's strongest tennis players of Russian origin Maria Sharapova presented her own brand of candy called Sugarpova in New York. 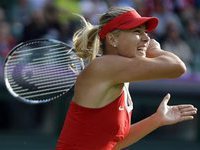 The new brand will offer 12 varieties of candy. Sharapova's fans will be able to buy her candy all over the world.

"I've worked with so many companies over the last few years, whether it was doing a collection or being part of an ad or face of a brand," she said by phone recently.

"I wanted to own something - something 100% me. Where I make all the final decisions; here I'm involved from start to finish; where I was bringing in my own people I want to work with and investing my own money. I wanted fun and young and nothing too serious. That's how it came about with candy."

Up to this port, the winner of all Grand Slam titles has served as the face of third-party companies that provided the lion's share of her income. Eighteen months ago, Sharapova decided to take up confectionery business. Chewing candies are manufactured at a factory in Spain.

Russian tennis player Maria Sharapova is one of the richest athletes in the world. According to Forbes, her annual revenue in 2011 made up $27.9 million, of which $22 million was earned in advertising. The tennis star is the "face" of such brands as Cole Haan, Evian, Head, Nike, Samsung, TAG Heuer, Tiffany & Co; she also advertises Canon, Prince, Land Rover and Lady Speed ​​Stick.