The sudden bankruptcy of one of Russia's major tour operators, Lanta Tour Voyage, has ruined the holidays of over 3,500 Russian tourists. The situation was most complicated in Thailand. An official spokesperson for Rosturism (the Federal Agency for Tourism) arrived in Thailand on Monday morning to regulate the problem. 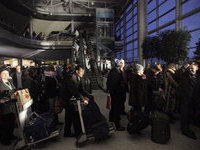 The news about the bankruptcy of Lanta Tour Voyage, one of the leaders of the Russian market of tourist services, became known on Friday night. The operator announced that it was suspending its further activities. Several dozens of clients of the company could not fly abroad the same day, Bigness.ru reports.

The information about the number of Lanta's clients abroad appeared on Saturday. The largest group of Russian tourists, who found themselves stuck in foreign lands, was in Thailand - 1,072 people. The list continues with 468 people in India's Goa, 309 in Vietnam, 250 in the Czech Republic, 146 in France, 135 in Cuba and 112 tourists in the Dominican Republic. The now-bankrupt company has sold over 3,000 tours before the middle of February 2012.

Many tourists were told to check out of their hotels because of the financial problems of the tour operator. The head of Rosturism, Alexander Radkov, said that there were incidents in Thailand and India, when hotel administrators made the clients of Lanta Tour pay for their accommodation repeatedly. The administrators threatened to evict the tourists in case they refused to meet their requirements.

"The black list of those hotels will be published on the website of Rosturism. There were also incidents, when they refused to return passports to Russian tourists. In general, though, the situation is not critical. The problem can be solved," Mr. Radkov said.

The official also said that a special representative of the Russian Federal Agency for Tourism arrived in Thailand to help the tourists on the scene. In addition, the agency sent out letters to tourist administrations of the countries, where Lanta's clients are staying. Russian officials asked their foreign counterparts to look into the problem not to let hotel managers violate the tourists' rights.

As many as 1,000 Russian tourists, who booked tours with Lanta Tour Voyage, will not be able to enjoy their long-scheduled holidays. The tour operator has been working on the tourist market for over 12 years. The company specialized on such destinations as Thailand, Vietnam and India, Vesti.Ru reports.