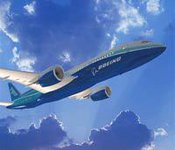 It was the Chicago-based company's third try at the contract since Congress and the Air Force first proposed the tanker replacement program in late 2001 -- a contest in which Boeing was viewed as an underdog, said an analyst, BusinessWeek reports.

Boeing estimates its tanker supports 50,000 jobs across the nation, including 11,000 in the state. About 800 companies across 40 states will supply parts for the 767 tanker, said Dennis Muilenburg, president of Boeing's defense division.

"From an economic standpoint, this is a very, very important program," he said, HeraldNet informs.