Dollar grows against all major currencies 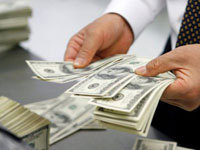 The dollar gained against most of its major peers before U.S. reports today and tomorrow that are forecast to show services industries grew for a 14th month and hiring increased in January.

The euro fell for the second day against the dollar as investors bet European Central Bank President Jean-Claude Trichet won't toughen the bank's anti-inflation stance. The Australian currency gained as reports on trade and building permits added to signs of resilience in the economy, according to BusinessWeek.

Three weeks after Jean-Claude Trichet jolted financial markets with a threat to raise interest rates, the European Central Bank President has even more reason to talk tough on inflation.

The euro-area rate rose to 2.4 percent in January, the highest in more than two years, workers are demanding bigger pay increases in Germany, where import-price inflation is running at the fastest pace in 29 years, and political tensions in Egypt are stoking oil prices.

The risk for Trichet is that his inflation-fighting rhetoric convinces investors the ECB will raise borrowing costs before Europe overcomes its debt crisis, Bloomberg says.