Love has put an end to BRITNEY SPEARS' working relationship with JASON TRAWICK. The singer has decided to fire Jason as her agent so they can focus on being a couple. 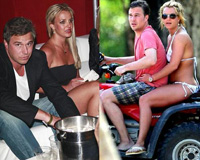 A spokesperson for Brit confirmed: "Britney and Jason have decided to end their professional relationship and focus on their personal relationship. "Since wrapping her recent world tour, she has been busy in the studio working on her next album.", The Sun reports.

They began dating last summer and has reached engagement rumors for quite some time. The couple has been seen to be in good terms together and things between them are getting better. “They are very happy,” a source said of the couple. “Things are really good with them.”

Britney has experienced a lot of ups and downs in her life already. Maybe it’s about time to straighten up and live a happy life. Everyone deserves it, including the ever gorgeous Britney Spears, World Correspondents informs.