Currency traders remained less than impressed Tuesday by the 110 billion euro ($145 billion) bailout of Greece finalized over the weekend with the European Union and the International Monetary Fund, with the single currency slipping to a fresh one-year low versus the U.S. dollar. 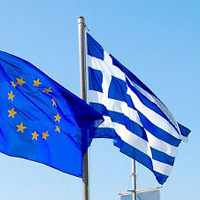 Reaction to the deal in European bond markets remained muted. The yield premium demanded by investors to hold Greek government debt over German bunds narrowed to around 5.43 percentage points Monday from around 5.94 percentage points at the end of last week. But spreads between Portuguese bonds and German bunds narrowed only slightly, MarketWatch reports.

"The Ministry of Finance presented today to parliament draft legislation on the policy measures relating to the activation of the support mechanism for the Greek economy by the euro-area member states and the International Monetary Fund," the ministry said in a statement.

The package of austerity measures includes a two percentage point increase in Greece's top value-added tax rate to 23%, as well as hikes in fuel, tobacco and alcohol taxes. Other measures include cuts in public-sector wages and reductions in both private- and public-sector pensions, Wall Street Journal informs.