As U.S. initial jobless claims were reported to unexpectedly fell last week, the dollar advanced to a three-month high against the yen. 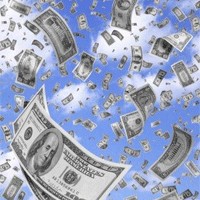 The greenback was headed for its first monthly gain since June versus the currencies of major U.S. trading partners on speculation the Federal Reserve is moving closer to withdrawing stimulus measures as the economy recovers, pushing Treasury yields higher.

“There’s a good labor market recovery coming through,” said Richard Franulovich, a senior currency strategist at Westpac Banking Corp. in New York. “Bond yields have gone up, and that should give the dollar a boost.”

It was also reported, investors are now eyeing the release of December's non-farm payroll number, due out 8:30 a.m. EST Jan. 8.

For the most part of 2009, ultra-low interest rates in the U.S. prompted investors to snap up the euro and other growth-sensitive assets every time there were signs that the global economy was emerging from the worst recession in decades. They would borrow cheap dollars, thus using the greenback to fund the purchase of other riskier assets.

As many investors are on the sidelines Thursday due to the holiday break, extreme light trading is exaggerating price moves, traders said. Japanese markets are closed and financial markets in many countries will shut down early for New Year's Eve. Virtually all markets in the world will be closed on Friday, The Wall Street Journal reports.

In the meantime, the Australian and New Zealand dollars were among the best performers among the major currencies in 2009, rising about 28 percent and 25 percent, respectively, against the dollar.

Next week, investors will look to the release of U.S. monthly payrolls data on Friday, where further indications of an improving U.S. economy could lift the dollar.

"It's going to be a hugely important number," said a trader at an Australian bank in Sydney. "Anything above forecast could see the euro finally break down through $1.42 toward $1.40.

"A weak result would be a real dampener after the run of upbeat figures we've seen. The market would have to rethink the Fed timing again, and that could see the euro back up at $1.4700," the trader said, Reuters reports.