According to London Stock Exchange Group Plc, trading in all securities restarted at 2:00 p.m. local time after dealings in "order-driven" shares had been halted for more than three hours because of a technical glitch. 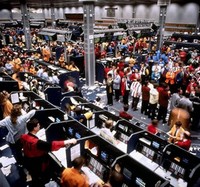 Today’s problems, which started with a connectivity issue at 9:32 a.m. London time, resulted in all FTSE 100 Index stocks and “order-driven” securities being placed in an auction period, meaning no trades could be executed.

The glitch comes after a problem related to one part of the LSE’s trading system affected dealings in 1 in 12 U.K. stocks on Nov. 9. The LSE, confronting alternative trading systems including Bats Europe and Chi-X Europe Ltd., which offer the same stocks with lower fees and faster trading, is buying Sri Lankan technology-services company MillenniumIT for $30 million to overhaul its technology and compete better.

As for the LSE, it was already weaker after yesterday's results showed signs of the competitive pressures it is facing, not to mention concern this morning about the fate of a 20.56% stake held in the company by Borse Dubai.

The last thing it needed was another embarassing trading outage, after a seven hour shutdown just over a year ago and a handful of other problems in recent weeks. Leaving the conspiracy theories aside - a shutdown to coincide with Wall Street's Thanksgiving break and the Eid holiday with a view to, presumably, locking in investors unnerved by Dubai - the exchange does not come out of this looking good. All order driven securities were put in an auction period from 10.38 this morning, with full trading not restarted until after 2 o'clock, guardian.co.uk reports.

It was also reported, the U.K. water regulator, Ofwat, on Thursday published its final decision on pricing to 2015. The agency said that companies will invest more than 22 billion pounds in maintaining and improving services to consumers, while household bills remain broadly flat until 2015.

"Water bills have been ordered to remain frozen for five years, giving much needed relief to water companies who had been facing a forced 4% cut in a previous draft ruling," said Richard Griffiths, senior equity trader at Spreadex.

Comparable sales fell 4% in the first half ended Oct. 17 but the trend improved toward the end of the period, with sales rising 1% in the final eight weeks. U.K. computing sales are improving significantly following the launch of Windows 7 since the period end, the firm added, MarketWatch reports.