Police in the US city of Orlando are hunting a gunman who opened fire in an office building, wounding at least eight people. 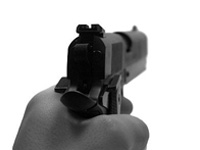 Orlando police identified the gunman as Jason Rodriguez, 40, who used to work there.

The attack took place on the fourth floor of the Gateway Center building at around 1130 local time (1630 GMT).

It comes a day after a gunman killed 13 people at an army base in Texas.

"A Swat [Special Weapons and Tactics] team is on scene, and we're still trying to secure various structures around the area to be sure that the shooter is not still in this immediate area," Sgt Jones said.

Panicked office workers rushed out of the building, but some had barricaded themselves inside.

Local television broadcasts showed a police helicopter hovering over the scene, as dozens of police cars blocked off streets in the surrounding area, according to BBC News  report.