Early Tuesday investors remained held back ahead of a batch of economic reports. Meanwhile, U.S. stock futures were flat 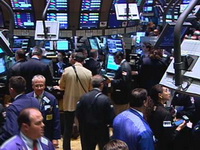 Futures measure current index values against their perceived future performance and offer an indication of how markets may open when trading begins.

Wall Street slumped Monday, with the Dow losing 104 points, as a spike in the dollar dragged on commodity shares, CNNMoney.com reports.

It was also reported, concerns over what Bank of America may have to raise in capital, the potential elimination of the first-time home buyer tax credit and a possible Federal Reserve interest-rate language change were among the many factors cited for the downturn in the market.

"A clear sign that the market has yet to fully emerge from its crisis-type trading mode was the shift into full risk aversion bias [Monday], which had all the typical hallmarks of the risk cycles witnessed during the 24 months: a sharp decline in equities, accompanied by a sharp rise in yields, strengthening funding currencies, a sell-off in risk currencies as well as oil, while gold retained its negative relationship with the dollar and declined," said Michael Hart, a currency strategist at Citi.

The economic docket picks up a bit on Tuesday as the S&P/Case-Shiller home price index for August, and the Conference Board's October consumer confidence reading. The Treasury will sell $44 billion in two-year notes, MarketWatch reports.

As for the rest of Monday's session and into the rest of the week, Kruszenski noted there was already a lot of attention being paid to a Thursday report on the U.S.'s third-quarter gross domestic product.

The financial sector's slump Monday followed a flurry of bank bankruptcies announced over the weekend that took the bank-failure total to 106 this year.

Bank of America tumbled 5.6%, while JPMorgan slid 2.5%, hurting the Dow. The Wall Street Journal reported Saturday that Bank of America's attempt to repay federal bailout funds and escape the government's grasp has been snagged by a disagreement over how much additional capital the bank must raise to satisfy regulators, according to people familiar with the situation.

The markets were also delivered a setback in October in Texas-area manufacturing. The Federal Reserve Bank of Dallas reported its production index came in at -8.0 from -0.5 in September, while new orders index fell to -2.8 from 8.0.

In other markets, gold futures were higher, while the dollar slid against the euro, but edged up against the yen. Treasuries fell, with the two-year note recently down 1/32 to yield 1.029%, and the 10-year note down 17/32 at 3.552%, The Wall Street Journal reports.