World-leading mobile phone maker Nokia Corp. on Thursday reported a loss of euro 559 million ($832 million) in the third quarter, due to a 20 % decline in sales and a one-time charge for the fallen value of its network equipment unit. 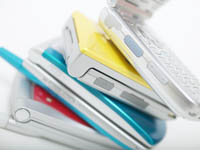 Net sales in the July-September period fell to euro 9.81 billion, down from euro 12.2 billion in the same period last year, partly due to a shortage of components across its product portfolio, Nokia said.

The company also booked a euro 908 million charge at Nokia Siemens Networks. The write-down reflects the company's recognition that it won't recover its investment in the joint venture it formed with Siemens AG in 2007 because of more difficult conditions in the industry and likely lower profitability.

The mobile phone industry has been hit hard by the financial crisis, but Nokia said the market outlook is improving. It raised its 2009 forecast for mobile phone volumes, saying it now expects a 7 % decline from the previous year, rather than the 10 % drop it had earlier predicted.

The company maintained its No. 1 position in global mobile phone sales, with 38 % market share — unchanged from the same period in 2008 and the second quarter of this year. It said it expects no growth in the fourth quarter.

Meanwhile, the average selling price of Nokia handsets was euro 62 — down from euro 72 in the same quarter in 2008, but unchanged from the second quarter of this year, according to the Associated Press' report.