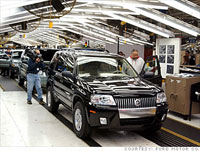 The action effectively closes out a 10-year saga over the switches made by Texas Instruments (TXN.N) that has led to more than a half-dozen recalls at Ford covering 14 million registered vehicles, the automaker said in a letter to the National Highway Traffic Safety Administration (NHTSA).

The government added two million vehicles to the Ford total, factoring in models not believed to be on the road. Affected vehicles should be taken to Ford dealers to be fixed, informs Reuters.

The recall covers 1.1 million Ford Windstar minivans that had a small risk of fire due to internal leaking from the switches. Ford said in a letter to federal regulators that it found a small number of reported fires linked to the problem during an internal investigation that began last year, but did not specify how many.

The remaining 3.4 million vehicles are Ford, Lincoln and Mercury models. Ford said there were no reports of fires with those models, most of them trucks and sport utility vehicles, but that they were included in the recall because they use the same switches. All vehicles covered by the recall are from the 1992 to 2003 model years.

Ford advised owners of all vehicles covered by the recall to park them outside until they are mailed instructions by the end of the month on how to get repairs, The Associated Press reports.

The switch, made by Texas Instruments Inc., can leak and then overheat, smoke, or burn. Ford had previously recalled 9.8 million vehicles, beginning in 1999, on the same defect. That number is Ford’s estimate of affected vehicles that are still on the road, a spokesman said.

No deaths or injuries are linked to the defect. The recall is the seventh involving the switch.

The automaker will notify owners beginning Oct. 26 to bring vehicles to dealers for repairs free of charge, Boston Globe reports.