Ford to Gain Its Piece In Indian Auto Market

Ford Motor Co., the only major U.S. automaker in its attempt to avoid bankruptcy, plans to retail its first small car in India next year, aiming to attract buyers in a country which favours hatchbacks. The automaker has already spent 60 % of its planned investment for India. 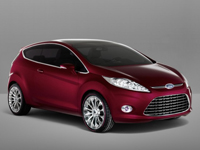 Ford to Gain Its Piece In Indian Auto Market

Toyota Motor Corp. and Volkswagen AG also plan to sell small cars in India, where Suzuki Motor Corp. controls more than half the market with its seven compacts. Rising disposable incomes in the world’s second-fastest growing major economy may more than double car sales to 3 million annually by 2015, in contrast to falling sales in the U.S., Japan and Europe.

India’s April-August car sales grew 13 % from a year earlier to 559,656, helped by the introduction of Tata Motors Ltd.’s $2,500 Nano, the world’s cheapest car. Ford’s sales dropped 2.5 % in the period to 10,128, according to the Society of Indian Automobile Manufacturers.

Suzuki had 53 % of the market, followed by Hyundai Motor Co. with 21 % and Tata with 12 %. Ford is seventh among the 15 manufacturers in the country, according to Society’s data.

Mulally believes that about 60 % of all vehicles sold worldwide in the next 20 years are going to be small-sized vehicles.

Ford is positioning its Chennai factory as a “regional center of excellence for small-car engineering and production,” the company announced in a statement. The automaker also plans to export diesel and petrol engines to Asia Pacific and Africa from India.