California's governor on Tuesday ordered that a third of the state's electricity come from renewable resources by 2020, the same amount as a legislature plan but with promises to let power companies get more electricity from outside the state. 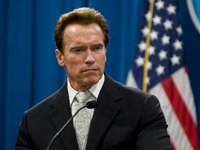 Governor Arnold Schwarzenegger believes that his plan may help the state better meet its clean energy target by making it easier to import power. He also said  the legislature's alternative would have required solar thermal plants to clear more regulatory hurdles before they could be built.

The most populous state is also the biggest U.S. alternative energy market, and its environmental standards including car pollution rules and green building regulations are models for national and international policies.

The state aims to cut greenhouse gas emissions that cause global warming to 1990 levels by 2020, and the governor has also called for the state to reduce carbon emissions to 80 percent below 1990 levels by the year 2050.

The executive order puts the state's Air Resources Board in charge of implementing the 33 percent standard and it could develop detailed guidelines by the middle of next year.

Some industry groups and renewable energy companies, such as Tempe, Arizona-based First Solar Inc, had lined up in favor of the legislation and urged the governor to sign the bills, according to Los Angeles Times' report.