Mortgage rates for 30-year fixed U.S. home loans fell to the lowest since May amid signs the housing market may be stabilizing and the recession is over. 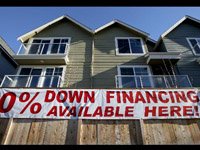 Falling home prices and a government tax credit for first- time buyers are bolstering demand for housing. A return to economic growth may also help the property market. Federal Reserve Chairman Ben Bernanke said this week that the worst U.S. recession since the 1930s has probably ended, yet growth may not be strong enough to quickly cut the unemployment rate.

The Federal Reserve set out last year to encourage lower mortgage rates by pledging to buy bonds backed by home loans. It increased the size of the program to $1.25 trillion in March.

The Mortgage Bankers Association’s index of applications to purchase a home or refinance declined 8.6 percent in the week ended Sept. 11. The group’s refinancing gauge fell 7.4 percent, while the index of purchases declined 10 percent.

U.S. home prices may fall another 10.5 percent and reach bottom at the end of next year’s second quarter, according to a report from Deutsche Bank AG. The total decline will be 38 percent measured from the estimated market peak in the fourth quarter of 2005, according to analysts. The forecast covers 100 metropolitan areas, reported by Bloomberg.