Intel is to change management starting on Monday, according to people briefed on the company’s plans. 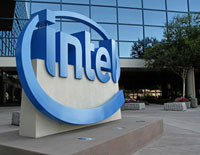 Among other changes, the chip maker will announce that Pat Gelsinger, the senior vice president in charge of Intel’s enterprise group, is leaving Intel after 30 years in a variety of roles.

Mr. Gelsinger is said to be taking on a new job at another high-tech company. In the past, Mr. Gelsinger has served as Intel’s chief technology officer and the head of its research division.

As Mr. Gelsinger departs, Sean Maloney, Intel’s head of sales and marketing, will take on an even larger role at the company, the people said. All of Intel’s major chip businesses, including its PC, graphics and server chips, will fall under Mr. Maloney, while Dadi Perlmutter, the head of Intel’s laptop chips, will now oversee engineering for all the chip divisions.

The company is the inventor of the x86 series of microprocessors, the processors found in most personal computers. Intel also makes motherboard chipsets, network cards and ICs, flash memory, graphic chips, embedded processors, and other devices related to communications and computing.

An Intel spokesman, Chuck Mulloy, declined to comment on the executive changes. Mr. Gelsinger was not immediately reachable for comment, according to The New York Times' report.