As it was reported earlier,The Stanford Financial Group, a privately held international group of financial services companies controlled by Allen Stanford, was seized by U.S. authorities in early 2009.   On February 27, 2009, the U.S. Securities and Exchange Commission amended its complaint to describe the alleged fraud as a "massive Ponzi scheme". 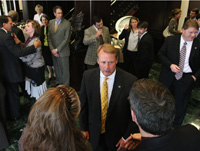 A security director for the shuttered Stanford Financial Group, and a deputy, were indicted for their alleged role in obstructing the probe of group's alleged $7 billion fraud, court documents unsealed on Thursday showed.

Thomas Raffanello, a former security director at the group's office at Fort Lauderdale, Florida, was charged with three counts. His deputy, Bruce Perraud, who was indicted previously, faces an additional two counts.

The indictment said the receiver handling the Stanford matter emailed all Stanford employees on February 17 to instruct them to preserve all records.

But around February 23, Raffanello ordered another Stanford employee to contact a shredding company, according to the indictment unsealed by the U.S. District Court for the Southern District of Florida.

Perraud arranged for a shredding company to come to the office and supervised the shredding of a 95-gallon bin full of documents, the indictment said.

Former billionaire Allen Stanford, who controlled the group bearing his name, has been in federal custody since his arrest on June 18. He has pleaded not guilty to fraud.

U.S. prosecutors accuse Stanford and others of selling fraudulent certificates of deposit issued by his offshore bank and bribing regulators and accountants in Antigua to ignore the alleged wrongdoing.

His former chief financial officer, James Davis, has pleaded guilty and has been cooperating with investigators.