China Unicom Ltd. said Friday it will sell Apple Inc.'s iPhone in China this year, ending months of rumor about when the hit phone would make its long-delayed debut in the world's most populous mobile market. 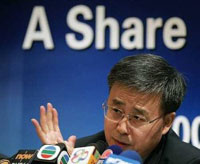 The phones are expected to go on sale in the final quarter of this year, Unicom said in a statement released in Hong Kong. It said the two companies struck a multiyear agreement but gave no financial details and did not say how much the iPhone would cost, reports Associated Press.

Chang, speaking to reporters at a press conference, said China Unicom will offer subsidies to customers who buy the handset, but he didn't elaborate on the amount.

It expects 3G users will make up 20% of China's mobile market in 2010, Wall Street Journal informs.

However, many analysts were skeptical of the impact on the bottom line for China Unicom.

"The financial impact of selling the iPhone is limited for China Unicom," said Yuanta Securities in a report dated August 21, citing the small target market for expensive smart phones, the absence of a Wi-Fi function and the high subsidies that the company may have to pay to attract users.

Unicom made the announcement as it said its profit in the first half of the year fell 45 percent to 6.62 billion yuan ($969 million) from 12.09 billion yuan. Seven analysts polled by Reuters had forecast a profit of 6.2 billion yuan, Reuters informs.