Swedbank reported steep losses driven by rising provisions for soured loans to the recession-rocked Baltic region, but the Nordic bank's shares rallied as it said its balance sheet could take the strain. 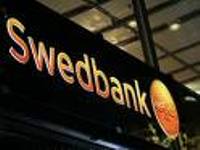 After a volatile morning's trade, Swedbank shares were up 5.9 percent at 1211 GMT, recovering from initial falls of close to 3 percent as the bank eased investors' concerns it might be forced to raise fresh capital, Reuters reports.

Layoffs, wage cuts and increasing bankruptcies have taken their toll on Swedbank and its Nordic peers with exposure to Europe's Eastern economies. Borrowers there are mired in double-digit recession and struggling to repay loans. Pressure was evident in the first quarter when surprisingly high loan impairments pushed Swedbank, the Baltic region's largest lender, into its first quarterly loss in over a decade, Wall Street Journal reports.