A car widely renowned as the most beautiful of all time is also now officially the most expensive after a model sold for €20 million at an auction. 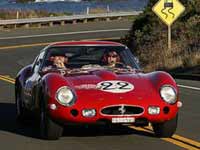 Only 39 models of the legendary Ferrari 250 GTO model were ever built, from 1962 to 1964. It was already considered one of the most valuable cars in the world, previously thought to have been worth approximately €14 million. But with the recent record-breaking sale, it seems the Ferrari 250 GTO is even more valuable than had been thought.

The fall of the hammer that sold the car for a whopping €20 million smashed the world record to bits. The previous holder was a 1961 Ferrari California Spyder which sold for about €7 million in May.

Powered by a three-litre V12 engine, the 302-horsepower Ferrari 250 GTO can reach speeds of 283km per hour.

And just who snapped up the wonderful wheels? An unknown buyer from England…