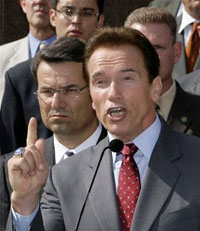 Lawmakers acknowledged the proposal would get the most populous U.S. state through its current fiscal year by closing a $15.2 billion deficit but would not solve California's persistent fiscal problems.

"Let's be clear: All we've done is roll the problem over to the next Legislature," said Senate President Pro Tem Don Perata, a Democrat who has reached his term limit this year.

Despite the apparent end to this summer's grueling budget battle, it was not immediately clear whether Gov. Arnold Schwarzenegger would sign the bill sent to his desk. He had told lawmakers he would not support the compromise proposal unless it contained a more robust fund for emergencies.

The final action in the Assembly, on a 61-1 vote, came shortly after 2 a.m. on the 78th day of the fiscal year, the latest date California lawmakers ever passed a spending plan. The Senate approved the package of budget bills 28-12 earlier in the morning.

Lawmakers said they were ready to end a deadlock that had paralyzed the Capitol in Sacramento for months, even if the final deal satisfied almost no one. The budget deadlock had delayed billions of dollars in payments to certain school programs, medical clinics and vendors, while stalling negotiations over broader policy issues such as revamping the state's water system.

The budget proposal includes $7.1 billion in spending cuts and fills the remaining gap by moving up tax collection deadlines and closing some tax loopholes. Those maneuvers will generate $9.3 billion, leaving a small reserve for unanticipated expenses.

A portion of the revenue depends on increasing state income tax withholdings by 10 percent for working Californians, a move that would raise $1.6 billion. It also would require those who pay estimated taxes - including corporations and wealthier Californians - to pay 30 percent of their taxes in each of the first two quarters of the fiscal year instead of 25 percent. That move would generate $2.3 billion.

At some point, the accelerated income tax and quarterly payments would have to be repaid to taxpayers, potentially through refunds. The higher withholdings will mean less take-home pay for many workers, tax experts said.

Another $1.9 billion would be added through a two-year suspension of tax deductions that businesses can take for losses, known as net operating losses, and limiting other tax credits.

Some provisions of the plan will require voter approval, likely through a special election. Those include the changes to the state's rainy day formula and a $10 billion plan to borrow against future lottery revenue.

Should voters reject the lottery proposal, it would leave a $5 billion hole in each of the next two fiscal years.