The end of Fannie Mae and Freddie Mac

The U.S. government has just become one of the biggest players in the U.S. mortgage market. 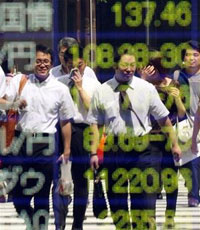 The end of Fannie Mae and Freddie Mac

The Bush administration announced Sunday it was seizing troubled mortgage giants Fannie Mae and Freddie Mac in a bid to help reverse a prolonged housing and credit crisis.

But private analysts worried that it may not be enough to stabilize the slumping housing market given the glut of vacant homes for sale, rising foreclosures, rising unemployment and weak consumer confidence.

Mark Zandi, chief economist at Moody's Economy.com predicted that 30-year mortgage rates, currently averaging 6.35 percent nationwide, could dip to close to 5.5 percent. That's because investors will be more willing to buy the debt issued by Fannie and Freddie - and at lower rates - since the federal government is now explicitly standing behind that debt.

"Effectively, the federal government has now become the nation's mortgage lender," he said. "This takes a major financial threat off the table."

Officials announced Sunday that both Fannie Mae and Freddie Mac were being placed in a government conservatorship, a move that could end up costing taxpayers billions of dollars. Treasury Secretary Henry Paulson said allowing the companies to fail would have extracted a far higher price on consumers by driving up the cost of home loans and all other types of borrowing because the failures would "create great turmoil in our financial markets here at home and around the globe."

The companies, which together own or guarantee about $5 trillion in home loans, about half the nation's total, have lost $14 billion in the last year and are likely to pile up billions more in losses until the housing market begins to recover.

The Treasury Department said it was prepared to put up as much as $100 billion over time in each of the companies if needed to keep them from going broke, in exchange for senior preferred stock. Treasury will immediately be issued $1 billion of such stock from each company, which will pay 10 percent interest. Further purchases of preferred stock will be triggered if quarterly audits find that the companies' capital cushion is below prudent standards.

The government, which will receive warrants representing ownership stakes of 79.9 percent in each company, is hoping that its moves will reassure nervous investors that they can continue to buy the debt of the two companies.

In a statement, President George W. Bush said, "Americans should be confident that the actions taken today will strengthen our ability to weather the housing correction and are critical to returning the economy to stronger sustained growth."

The conservatorship will be run by the Federal Housing Finance Agency, the new agency created by Congress this summer to regulate Fannie and Freddie, a move taken at the same time that Congress greatly expanded the power of the Treasury Department to make loans to the two companies and purchase their stock.

The executives and board of directors of both institutions are being replaced. Herb Allison, the former head of the TIAA-CREF retirement investment fund, was selected to head Fannie Mae, and David Moffett, a former vice chairman of US Bancorp, was picked to head Freddie Mac.

Paulson was careful not to blame Daniel Mudd, the outgoing CEO of Fannie Mae, or Freddie Mac's departing CEO Richard Syron for the companies' current problems. While both men are being removed as the top executives, they have been asked to remain for an unspecified period to help with the transition.

Fannie and Freddie both purchase home loans from banks and then repackage those loans as mortgage-backed securities which they either hold on their own books or sell to investors around the globe. This process provides banks with more money to make more home loans, greatly expanding home ownership.

The impact of the government takeover on existing common and preferred shares, which have slumped in value in the last year, will depend on how investors react to Paulson's assertion that they must absorb the cost of further losses first. Under the plan, dividends on both common and preferred stock would be eliminated, saving about $2 billion a year.

Analysts were split on how much the takeover could eventually cost taxpayers although they all agreed the up-front costs will be substantial, possibly hitting $100 billion as the Treasury is called upon to bolster the capital cushions at both institutions.

However, if the plan does the trick of stabilizing the housing market and home prices stop falling and rebound, then the assets of both Fannie and Freddie should rise in value and the government should be able to sell off the companies and recoup its investments.

But it could take a long time to work through that process given all the headwinds facing housing at the moment from the plunge in home prices to soaring defaults on mortgages which are dumping more homes on an already glutted market. The weak economy has pushed unemployment to a five-year high of 6.1 percent, further reducing demand for homes.

"I think the government will end up having to put in far more money then they are planning right now (given all the problems facing housing) but the important thing is the agencies have been taken over by the government," said Sung Won Sohn, an economics professor at California State University Channel Islands. "That means there will be less panic in financial markets."

Under government control, the companies will be allowed to expand their support for the mortgage market over the next year by boosting their holdings of mortgage securities they hold on their books from a combined $1.5 trillion to $1.7 trillion. Starting in 2010, though, they are required to drop their holdings by 10 percent annually until they reach a combined $500 billion.

In addition, officials said the Treasury Department plans to purchase $5 billion in mortgage-backed securities issued by the two companies later this month, the first of a series of purchases planned by the government in an effort to bolster for these securities, which was badly shaken a year ago when the credit crisis first erupted with soaring defaults on subprime mortgages.

Paulson said that it would be up to Congress and the next president to figure out the two companies' ultimate structure and the conflicting goals they operated under - maximizing returns for shareholders while also being required to facilitate home buying for low- and moderate-income Americans.

"There is a consensus today ... that they cannot continue in their current form," he said.