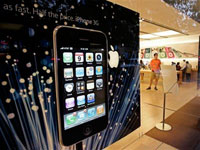 MegaFon did not provide further details of the deal.

iPhones have not gone on sale officially in Russia, but are readily available on the "gray" market, selling for around US$1,000, several times the current retail price in the United States.

Many Russians get them for considerably less by asking friends to buy them while on trips abroad, then paying another US$100 to unlock the phones, so that they can use them in Russia.

With an estimated 500,000 earlier generation devices already in use, Russia is one of the biggest markets for iPhones outside the United States.

The announcement was made just days after Vimpelcom said it had reached agreement with Apple on selling the phone in Russia. MTS, the only one of the "big three" Russian operators not to formally announce a deal with Apple, could not immediately be reached for comment.

Analysts said Russian operators could find it difficult initially to woo buyers, who could be put off by being able to use the iPhone on only one network.

"Typically Russian operators are not strong handset sellers, and users prefer to buy handsets separately from their mobile contracts," said Konstantin Belov, a telecoms analyst at UralSib. "But the iPhone is very popular, and if mobile operators start subsidizing it, they will probably see strong demand."

The iPhone 3G, which went on sale in the United States on July 11, is designed to deliver snappier Web surfing and online video viewing than the year-old original model.