Japanese electronics maker Toshiba said Tuesday it swung to a net loss of 11.6 billion yen (US$107.91 million) in the April-June quarter due to a slump in semiconductor sales. 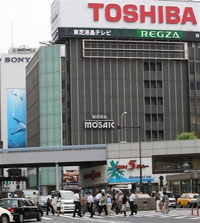 Sales at the Tokyo-based company fell 2.8 percent during the quarter to 1.62 trillion yen (US$15.07 billion), compared with 1.66 trillion yen a year earlier.

Toshiba Corp. made a group net profit of 20.63 billion yen in the same quarter a year ago.

"The Japanese economy is entering a severe slowdown phase, on the impact of the slowdown in the global economy and surging crude oil prices," Toshiba also said in a statement.

Toshiba reported a group operating loss of 24.18 billion yen (US$224.93 million) during the first quarter due to a weak flash memory market.

On a bright side, digital products moved into the black on solid performances in TV and hard disk drives, offsetting the impact of the withdrawal from its HD DVD business, Toshiba said. Upbeat business in power generation system and other industrial equipment helped increase profitability.

But the company noted a need to "carefully assess emerging trends in the business environment," leaving a possibility open for a revision.

Toshiba shares fell 1.51 percent to 719 yen (US$6.69) Tuesday. The company announced its earnings after the Tokyo Stock Exchange closed.