The euro roared to a new high against the dollar on Tuesday, reaching US$1.6038 in European trading as markets worried about the ongoing U.S. lending crisis and the state of the country's economy. 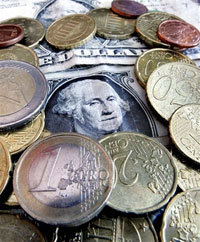 The 15-nation currency's new all-time high against the dollar surpassed its previous record of US$1.6018 set on April 22.

The increase came even as a new report showed that German investor confidence tumbled to its lowest level in more than 16 years amid soaring food and oil prices in Europe's biggest economy.

The ZEW institute said its monthly index, which measures investors' expectations for the German economy over the next six months, dropped to minus 63.9 in July from minus 52.4 in June.

"Even the shocking ZEW survey has been insufficient to lend any sustainable sympathy to the dollar," said James Hughes, a currency analyst at CMC Markets in London.

He added that the currency traders were derisive about Sunday's announcement by the U.S. Federal Reserve regarding its plan to shore up mortgage lenders Fannie Mae and Freddie Mac.

"It's apparently done little more than underline the perilous state of the U.S. economy," he said.

The euro's rise has caused concern among companies and politicians in countries that use the currency - fueling fears that it could dampen exports as European goods become more expensive to American buyers.

Reflecting those worries, automaker Volkswagen AG is considering where in the U.S. it will build a new auto plant in part to help mitigate the effect of currency differences while BMW AG has already said it will expand production in South Carolina.

The dollar has been on an extended slide against other major currencies, especially the euro and the Japanese yen, for some five years, during which the U.S. trade deficit with the rest of the world generally continued to widen.

That required more borrowing from abroad, further weakening the dollar.

At the same time, European economies expanded, driving up the value of the euro against the dollar.

Over the past year, a series of rate cuts by the Fed to deal with the fallout from the U.S. housing and credit crises have also pushed dollar's value downward.

In contrast, the European Central Bank, which sets interest rates for the 15-nation euro zone, has only adjusted its own rate just once since last summer, making no cuts and then raising rates by a quarter percentage point last month to 4.25 percent.

Lower interest rates can weigh on a nation's currency as traders transfer funds to countries where they can earn better returns, while higher rates are used to curb inflation.