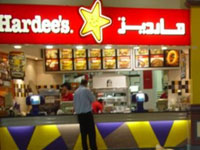 The company has not unveiled financial details of the deal.

CKE Restaurants, Inc. is the parent company of the Carl's Jr., Hardee's, Green Burrito, and Red Burrito restaurant chains. Its headquarters are in Carpinteria, California. It was incorporated in 1964 by Carl's Jr. founder Carl Karcher as Carl Karcher Enterprises, Inc.

The current CEO is Andrew Puzder, who received his juris doctorate in 1978 from Washington University School of Law in St. Louis and is a member of California, Nevada and Missouri bar associations, and has served as CKE CEO since September 2000.