Books do not sell in America

As publishers pray for a new children's series to equal Harry Potter and await the next novel by "The Da Vinci Code" author Dan Brown, a report released Friday predicts a tight market for at least the next few years. 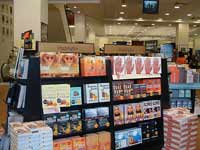 Books do not sell in America

The Book Industry Study Group, a nonprofit organization supported by the publishing industry, projects a 3 percent to 4 percent growth through 2011, when revenues should top $43 billion (EUR 27.65 billion). The BISG expects little change in the actual number of books sold and sees a drop in the general trade market by more than 60 million, from 2.282 billion copies in 2007 to 2.220 billion in 2011.

"The hits will keep doing well, but other books will have troubles," says BISG senior researcher Albert N. Greco, a professor of marketing at the Fordham University Graduate School of Business.

The findings were announced at BookExpo America, being held this weekend at the Los Angeles Convention Center.

Barring another Potter-like phenomenon, Greco believes the children's market will barely break even. Modest gains are projected in most adult categories, although that could change once Brown comes out with his long-awaited follow-up to "The Da Vinci Code." No release date has been set for the novel, which also features protagonist Robert Langdon, a Harvard University professor who interprets symbols.

The biggest losers likely will be mass market paperbacks, which continue to plunge as baby boomers seek formats with larger print, while religious books should keep growing, by more than 5 percent annually.

The hottest market, according to the industry study group, isn't books, but standardized tests, boosted by the requirements of the No Child Left Behind legislation. Growth of 8 percent or better is expected through at least 2009.

"It's the one sector, without a doubt, that's really going to expand," Greco said.