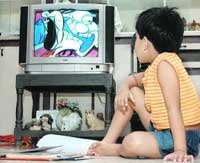 The company’s revenue for services and technology gained $54.9 million, down from $58.1 million the previous year.

TiVo reported that it had 3.8 million total subscribers in the first quarter, compared with 4.3 million in the same period a year ago.

As for forecasts, the company expects a net loss of $2 million to $4 million in the current quarter on service and technology revenue of $53 million to $55 million.

The company’s stock closed at $8.10, down 16 cents or 1.9 percent, on Wednesday. After-hours trading added 2 cents to shares.