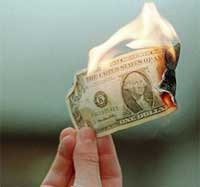 This arrest is a result of a three-year probe of stock-loan desk workers who allegedly took millions of dollars in kickbacks.

Former employees of both firms were among a group of six people who funneled millions of dollars in fraudulent finder fees to their co-conspirators for cash bribes.

The defendants may get 25 years of imprisonment if convicted.