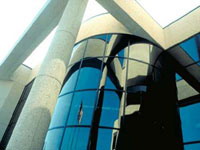 BCE reported that its $52 billion buyout by the Ontario Teachers' Pension Plan was in trouble as investment banks financing the deal seek to renegotiate lending terms.

Talks on BCE began to fray late on Friday, and the banks sent the buyers a set of revised terms, including higher interest rates, tighter loan restrictions and stronger protection that far exceeded the original terms. Talks lasted all weekend. But it turned obvious that the banks had no intention of closing the deal.

Due to its stagnant share price, starting in April 2007, BCE was courted for acquisition by pension funds and private equity groups, including a consortium led by the Canada Pension Plan Investment Board (with Kohlberg Kravis Roberts as one of the participants), a consortium led by the Ontario Teachers' Pension Plan, and a consortium that included Cerberus Capital Management. The transaction would give the OTPP effective control of Bell's 15% share in CTVglobemedia, thus bumping OTPP's share up to 40%, putting it at parity with The Woodbridge Company.

On June 30, 2007, BCE accepted a bid from the group led by the Ontario Teachers' Pension Plan of $42.75 per share in cash, for a total valuation of $51.7 billion, the largest acquisition in Canadian history. BCE shareholders approved the sale on September 21, 2007.