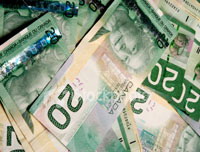 The New York City-based company said its revenue swooped down 94 percent to $68.5 million in the first quarter due to negative profit quantity derived from its investment funds. This year the company had only one leveraged buyout worth of $1.2 billion, compared with $42 billion in deals the previous year.

The main blow came from the evaporation of credit in the second half of last year that resulted in the inactivity of the LBO market, and from cut hedge-fund profits.

The expected profit from real estate funds decreased to $47.9 million from $766.8 million a year earlier.

Blackstone faced a net loss of $251 million, or 97 cents a share, including costs related to the vesting of executives' ownership stakes as part of the IPO.