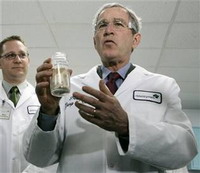 The joint venture will primarily be launched to develop production techniques of biofuel.

The project will be called DuPont Dansico Cellulosic Ethanol LLC, and will be aimed at producing ethanol, a plant-based gasoline substitute, from corn stover and sugar bagasse.

The companies are also going to develop production techniques for non-food crops grown specifically for fuel, such as wheat straw.

Cellulosic ethanol is a type of biofuel produced from lignocellulose, a structural material that comprises much of the mass of plants. Corn stover, switchgrass, miscanthus and woodchip are some of the more popular cellulosic materials for ethanol production. Cellulosic ethanol is chemically identical to ethanol from other sources, such as corn starch or sugar, but has the advantage that the lignocellulose raw material is highly abundant and diverse.

According to U.S. Department of Energy studies conducted by the Argonne Laboratories of the University of Chicago , one of the benefits of cellulosic ethanol is that it reduces greenhouse gas emissions (GHG) by 85% over reformulated gasoline. By contrast, starch ethanol (e.g., from corn), which most frequently uses natural gas to provide energy for the process, may not reduce GHG emissions at all depending on how the starch-based feedstock is produced. A study by Nobel Prize winner Paul Crutzen found ethanol produced from corn, rapeseed (canola), and sugarcane had a "net climate warming" effect when compared to oil.

$140 million over three years will be invested in DuPont Dansico Cellulosic Ethanol LLC, that will be operated as a 50-50 venture. It will be headquartered in the U.S. and is due to be operational in 2009, with a commercial-scale demonstration plant coming on-line by 2011.