Air Midwest to discontinue its service

Air Midwest, Inc. will cease to exist due to increasing fuel costs, according to Mesa Air Group. 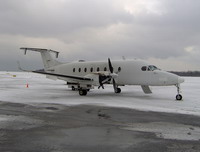 Air Midwest to discontinue its service

Air Midwest is headquartered in Wichita, Kansas , United States and is a subsidiary of Mesa Air Group. It operates flights as US Airways Express, including a code share with Midwest Airlines, and as Mesa Airlines. It serves 28 cities in 12 states.

The service will be eliminated in 16 small cities in 10 states. The cuts will begin next week and be completed by June 30.

A report published in The Wall Street Journal on January 14, 2008, already included a statement from Mesa CEO Jonathan G. Ornstein that the company had decided to shut down Air Midwest, citing significant losses stemming from increased maintenance and fuel costs. All cities served by Air Midwest received notices of intention to end service, except for Prescott and Kingman, Arizona.