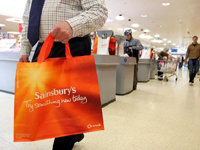 Net income climbed to 329 million pounds ($640 million), or 18.6 pence a share, in the year ended March 22 from 324 million pounds, or 18.9 pence, in the prior period, the London-based company said today in a statement. Year-earlier profit included a 72 million-pound pension gain.

Sales at stores open at least a year have risen for 13 straight quarters as Sainsbury seeks to raise the proportion of revenue derived from goods besides food to 20 percent from 15 percent, to keep up with larger rival Tesco Plc. Sainsbury's cheapest "Basics" food range and the most expensive, "Taste the Difference," are fueling growth, and sales of organic fresh produce pile up 20 percent in the first half.

"Sainsbury is exposed to attractive customer segments, drawing from more affluent customers who are more willing to pay for products in the fastest-growing premium segments," such as organic and fair trade, Christopher Hogbin, an analyst at Sanford C. Bernstein in London, said in a note before the results were released. He has an "outperform" rating on the stock.

Sainsbury fell 8.5 pence, or 2.1 percent, to 389.75 pence yesterday in London trading. The shares have fallen 8.4 percent this year, the same as larger competitor Tesco Plc.

J Sainsbury Plc is the parent company of Sainsbury's Supermarkets Ltd, commonly known as Sainsbury's, a chain of supermarkets in the United Kingdom. It is the third-largest U.K. supermarket chain. The group also has interests in property and banking. The group has an estate worth about £8.6 billion.