Last week the number of workers seeking unemployment benefits shortened. Analysts wonder whether it is a new trend or a temporary change on labor-market. 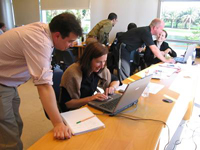 The Labor Department reported Thursday that applications for unemployment benefits fell to 365,000, a decline of 18,000 from the previous week. Economists had been looking for a much smaller decrease of around 5,000.

Weekly jobless claims have been exceptionally volatile in recent weeks because of strike-related layoffs in the auto industry and an unusually early Easter, which has played havoc with the government's seasonal adjustment measurements.

Many economists believe that a prolonged housing slump and severe credit crisis have pushed the economy into a recession. For that reason, they believe job layoffs will rise in coming months as the unemployment rate climbs higher.

Ian Shepherdson, chief U.S. economist for High Frequency Economics, said that even with the improvement this week, claims are now at a level equal to where they were at the start of the last recession in March 2001. He predicted that layoffs would increase further in coming months.

However, many economists believe that job losses will be less severe than in previous recessions because they are expecting this downturn to be relatively mild and brief. The Bush administration is counting on 130 million economic stimulus payments to boost consumer spending and trigger a rebound in growth starting this summer.

The Labor Department reported last week that employers cut jobs for a fourth straight month, often a sign of a recession, but the job loss of 20,000 was much smaller than had been expected and was well below the 81,000 jobs lost in March.

In other economic news, consumers gave retailers some relief in April after a long stretch of dismal sales. Early reports from the nation's big chain stores showed customers bought the basics at discounters and wholesale clubs, putting Wal-Mart Stores Inc. and Costco Wholesale Corp. among the top performers last month.