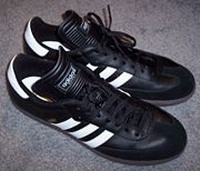 Collective Brands announced its plans to overturn the verdict.

Adidas AG is the part of the Adidas Group, which consists of Reebok sportswear company, Taylormade golf company, and Rockport. The company is the second largest sportswear manufacturer in the world.

The company's clothing and shoe designs typically feature three parallel stripes, and this same motif is incorporated into Adidas's current official logo. The company revenue for 2007 was 10.299 billion EUR, or about $15.6 billion.