Talbots (NYSE: TLB), a Massachusetts clothing retailer, plunged deeper in more than 14 years when it learned that two banks canceled $265 million in letters of credit. 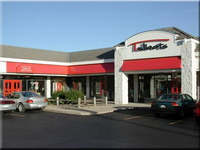 On Tuesday Talbots announced that HSBC Holdings Plc and Bank of America Corp. ended the agreements.

A $130 million letter of credit with Bank of America expired, while HSBC, which originally agreed to back $135 million, will guarantee reduced amounts until the accord ends in August.

New York Stock Exchange revealed the consequences of this action - $3.85 - $9 fall of its shares Wednesday that marks the biggest drop since its initial share sale in November 1993.

Actually the company’s crisis marked the peak in 2007, when it reported a loss of $188.8 million and had to struggle for customers against Coldwater Creek Inc. and Macy's Inc.

This situation has scared the majority of banks that are pulling back from any lending. But losing the letters of credit means that the company won’t get required goods from suppliers without up-front cash payments.