Starbucks and iTunes launch Pick of the Week

Starbucks and iTunes announced Pick of the Week, a new program offering coffeehouse customers a chance to discover complimentary new music and music videos each week. Pick of the Week featured artists include a great line-up with Carly Simon, Duffy, Counting Crows, Adele, Sia, Hilary McRae and many more. 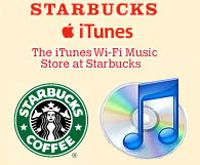 Starbucks and iTunes launch Pick of the Week

Each Tuesday, more than 7,000 Starbucks company-operated locations in the US will stock a new Pick of the Week download card redeemable on the iTunes Store (www.itunes.com) for a complimentary song or music video hand-picked by the Starbucks Entertainment team and iTunes. The first Pick of the Week, available starting April, 15 at participating Starbucks locations, is Counting Crows' new song, " Washington Square."

"With Pick of the Week, Starbucks will leverage its trusted curatorial voice in music and entertainment through its partnership with iTunes to provide our customers with a world-class digital discovery experience," said Ken Lombard, president Starbucks Entertainment.

"Pick of the Week provides an incredible way for Starbucks customers to discover great new music and videos for free on the iTunes Store," said Eddy Cue, Apple's vice president of iTunes. "With the world's largest online catalog of music and video there is truly something for everyone."

Pick of the Week is the next phase in a partnership between Starbucks and Apple which began with the launch of the Starbucks Entertainment Area within iTunes in October 2006 and the launch of the iTunes Wi-Fi Music Store at select Starbucks locations in October of 2007. The iTunes Wi-Fi Music Store at Starbucks lets customers at participating Starbucks use the Wi-Fi network to wirelessly download music onto their iPhone, iPod touch or computer with no Wi-Fi connection fees or hotspot login.

Starbucks Corporation is a transnational coffee and coffeehouse chain company based in the United States. Starbucks is the largest coffeehouse company in the world, with 15,011 stores in 44 countries. Starbucks sells drip brewed coffee, espresso-based hot drinks, other hot and cold drinks, snacks and items such as mugs and coffee beans. Through the Starbucks Entertainment division and Hear Music brand, the company also markets books, music, and film. Many of these products are seasonal or specific to the locality of the store.