JFE Holdings saving itself from takeover 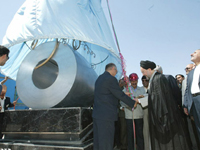 JFE Holdings saving itself from takeover

Japanese steelmakers are struggling to bolster capacity as demand from car and shipbuilding industries is booming, while the world's top maker, ArcelorMittal is aggressively expanding capacity, making them vulnerable to takeovers.

JFE, the world's third-largest steel maker, said the three would start a feasibility study on constructing blast furnaces and a plant capable of producing 5-6 million tonnes a year of steel slab in Brazil's northeastern Ceara state.

The second-biggest steelmaker in Japan plans to make the operation a consolidated unit if the firms decide to go ahead with the 500-600 billion yen ($4.9-5.9 billion) project, JFE said.

Dongkuk, which makes steel products such as plates and bars from imported raw materials and has no experience in blast furnace technology, said in November it would build a $2 billion steel plant in Ceara.

"JFE agreed to take a leading role in building and operating the plant after reviewing feasibility of the project," Dongkuk said in a filing to Korea's stock exchange on Tuesday.

Dongkuk said the deal would double the annual production capacity of the plant from its original forecast of 2.5-3 million tonnes and improve production efficiency by helping it secure a stable raw material supply source.

"Now that the fourth group has started a feasibility study, a possible production glut in the early 2010s is a concern," said Takashi Murata, analyst at Daiwa Institute of Research.

JFE denied the concern, saying products would be sold to JFE's joint venture in California and affiliates and clients in Asia.

Nippon Steel, the world's second-biggest, in August unveiled a $9.8 billion investment plan at its Brazilian affiliate Usiminas. The new plants will start operating in the early 2010s.