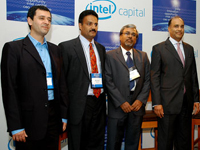 "We aim to foster innovation and local entrepreneurship throughout the world," Arvind Sodhani, president of Intel Capital, told reporters.

Intel Capital did not say how much it has earned, only that it aims to achieve a 20 percent return on its investments.

The new fund is also the largest of its kind for a single country for Intel Capital.

"That should give you a pretty good idea of the importance and size of Intel's commitment to China," said Sodhani.

The first fund has invested in approximately 30 Chinese firms and was originally expected to take up to seven years to be fully invested.

"We managed to invest that fund in three years," he said.

Intel Corp provides all the capital for Intel Capital, allowing it to take a long term view on investments, which can last as long as 10 years.

In 1998, Intel Capital had less than 5 percent of its portfolio invested outside the United States. That figure had reached 37 percent by last year.

Intel Corporation is the world's largest semiconductor company and the inventor of the x86 series of microprocessors, the processors found in most personal computers.