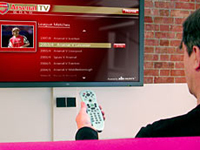 The stake was bought by KSE U.K. Inc., an investment vehicle controlled by U.S. billionaire Stan Kroenke, for a total consideration of 22.7 million pounds ($45.1 million.

ITV is selling stakes in businesses that aren't strategic to fund acquisitions and an expansion of production and Web operations. The company, which in March sold its 50 percent stake in the Liverpoolfc.tv Web site for 15.75 million pounds, said today it has raised over 620 million pounds by selling such assets since the broadcaster was formed in 2004.

ITV Plc sells its stake in Arsenal Broadband Ltd
ITV will cease to be the commercial agent for Arsenal and will no longer represent the club's licensing activities, Arsenal said in a separate statement today. Last year, Kroenke bought a 9.9 percent stake in the Arsenal soccer club from ITV and now owns 12.2 percent of the club.

ITV has received a total of 65 million pounds from KSE for interests in Arsenal, the broadcaster said.

KSE said today that in cooperation with Arsenal it will further develop soccer in the U.S. and "capitalize on the experience and strength of Arsenal Football Club."