Apples appear in many religious traditions, often as a mystical or forbidden fruit. Today it’s one of the most recognizable shapes around, and it's become the face of success for the maker of iPhones and iPods. 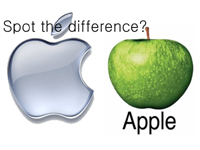 Now Apple Inc. is trying to protect its rights to the apple shape by going after New York 's trademark application for a new "Big Apple" logo. The company says the design looks too much like the apple that is the symbol of its own brand.

Apple believes the logo for New York 's "GreeNYC" initiative, which promotes recycling and eco-friendly behavior, could be easily confused with its own emblem.

The city’s marketing office filed the trademark application in May, and the logo is used on its Web site and promotional materials. Apple challenged the application in January. Last month New York protested Apple's challenge, saying its protection of the logo is too broad.

It seems unlikely that consumers would mistake New York 's green campaign as being connected to the company.