T-Mobile has cut its price in Germany for the most basic version of Apple Inc's iPhone to 99 euros ($155) from 399 euros ahead of the expected launch of a new model. 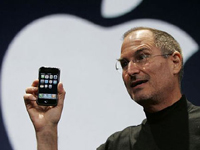 In an offer posted on Friday on its Website (http://tinyurl.com/29pokf), T-Mobile said it would sell the 8 gigabyte version for as little as 99 euros together with a two-year contract costing 89 euros a month from April 7 through June 30.

The 16 gigabyte version will continue to cost 499 euros, in conjunction with a minimum 49 euros-per-month two-year contract.

Apple is expected to launch later this quarter a third-generation, high-speed version of the iPhone, which advanced it into 10th place in global handset vendor rankings in the fourth quarter of 2007 after its launch at the end of June.

Bank of America analysts expect Apple to produce as many as 8 million of the new iPhones in the third quarter. Apple itself has said it expects to have sold 10 million iPhones in total by the end of 2008.

Deutsche Telekom said at the end of January it had sold 70,000 iPhones since they went on sale in Germany at the beginning of November, but has given no update since.